By
Two years after Typhoon Yolanda struck this region, Leyte and Samar are now back on their feet. Still beautiful, still amazing, but now more meaningful—it’s your cue to visit Eastern Visayas
Okay, so you have mustered the courage and surmounted that fear of falling prey to the Laglag-Bala extort scheme at the airport as the travel itch gnawing upon your innermost being is just far stronger than any other force on the planet. And you’ve set your sight to take on the next road-less-traveled route. So where to go?
This time, make it Eastern Visayas!


Super typhoon Haiyan/Yolanda—the strongest typhoon ever recorded in modern history to have made landfall—ludicrously achieved something tourism advocates from our end have always dreamed about—and, that is, to put Tacloban City and the Eastern Visayas Region on the world tourism map. Two years since Yolanda struck, Tacloban City and its immediate environs—Ground Zero of Yolanda’s wrath—can safely be described as up and running on its way to full recovery.

So what’s new after Yolanda in Eastern Visayas, you ask.  A lot more than you would have expected.
Here are some of the highly recommended newly launched destinations.

THE SAN JUANICO CRUISES An upcoming major tourism thrust for Tacloban City and nearby towns, the San Juanico Cruises offer leisurely cruises along the scenic San Juanico Strait, the narrowest strait in the Philippines and the second narrowest in the world. A typical cruise passes underneath the longest bridge in the country, the famed San Juanico Bridge that links the islands of Samar and Leyte. Experience the soothing and relaxing cruise and marvel at the picturesque scenes along the strait, which is dotted with tropical islets with local fishermen tending to their bangus fish cages, their produce being one of the best tasting bangus in the entire country. Initial packages include a sunset cruise for one to experience the spectacular sunset view this side of the world, and a morning cruise, both of which depart from Tacloban City. Regular runs are expected to start by end of this month.

THE SOHOTON CAVES AND NATURAL BRIDGE NATIONAL PARK, Basey, Samar A must-visit destination near Tacloban City, exploring the hidden wonders of Samar starts here where getting close to as well as communing with nature is at its best! It is a major component of the Spark Samar tourism drive, where the journey to the cave park is an adventure by itself. One takes a motorboat up the Golden River, and then explores the cave complex with its limestone outcrops and enormous stalactites and stalagmites.  From there, one goes kayaking up the narrow and shallow river through a rainforest surrounded by limestone cliffs until you reach the natural bridge and water gorge where one cannot resist taking a dip in the cool, refreshing waters. What used to be a destination difficult to access is now only about an hour-and-a-half drive from Tacloban City to the jump-off point in Basey, Samar, 15 minutes by motorboat to the cave park, and 10 minutes kayaking to the natural bridge.

ULOT TORPEDO BOAT ADVENTURE, PARANAS, SAMAR TRUE, real, unperturbed nature adventure in Samar is best experienced here. The Torpedo Boat Adventure will take you downstream on a motorized boat with no outriggers, over a distance of 10.5 kilometers that cuts through more than 10 river rapids of the Ulot River, the longest river system that runs through the whole island of Samar, traversing the dense rainforests teeming with the best wildlife Mother Nature has bestowed upon it. Lunch break is at Deni Point where one may go birdwatching, swimming, or even jumping into the ravaging waters. And just when you think the adventure is over, you get back on the boat for your return trip, this time a more exciting upstream ride against the rapids!

MARABUT ISLAND HOPPING OFF the coast of Marabut, Samar, an hour’s drive from Tacloban City, one can find a coastline dotted with picturesque islets made of limestone carved over eons of time by nature’s elements. Marvel at the spectacular blue-green clear waters as you go island hopping, snorkeling, or simply exploring these unspoiled tiny islets nestled in tropical postcard-perfect seascapes. Jump-off point is at the famed Caluwayan Palm Island Beach Resort at Brgy. Caluwayan, Marabut, Samar. 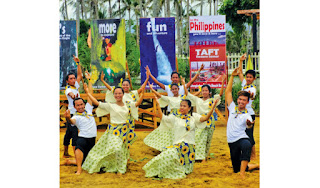